Check out the digital edition of the Breeders' Bible, Journal of the American Saddlebred!

Cheers to the American Saddlebred

ASHBA has partnered with Lujon Wine Cellars to create customized wine bottles for you! The absolute perfect gift or keepsake item to memorialize your favorite horses, riders and remarkable moments. The best part for ASHBA?

Your purchase through the Cheers to the Saddlebred program is a donation! So not only do you receive your beautiful bottles and delicious wine, but part of your purchase is tax-deductible.

Learn more about this fundraiser.

The Futurity Prize Programs are making BIG changes to make it easier to WIN BIG! 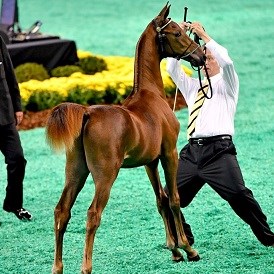 In a year full of reflection, change and adaptations, the Registry Kentucky and National Futurities Committee came to the table to review how to make the Registry Futurity Programs bigger, better and more inclusive. Focus groups were formed and stakeholders from all levels of breeders and futurity participants were consulted to look at what could be done to grow the participation in the Futurities and create more incentive for breeders.

The ASR Board has voted to approve the committees’ following recommendations for changes to the Registry Futurity Prize Programs that will begin to start taking effect in 2021:

“Our committee worked hard and listened to breeders, owners and futurity participants from all across our industry in formulating these changes,” shared Committee Chair Smith Lilly, “Most participants agreed that they would like to see a more streamlined process that was easier to understand and keep up with.  We also heard loudly and clearly that we needed to be more accessible to the grass roots of our industry.  In eliminating mare and stallion fees and combining the KY and National Three Year Old Futurities into one program, along with spreading prize money out to allow more people to get a slice of the pie and adding an under saddle division for two year olds, we feel we have been responsive to every segment of our industry and invite all breeders owners and trainers to be a part of these exciting changes!  We are also proud to add an under saddle class for the Amateur Futurity and look forward to seeing increased nominations as a result.”

The ASR Futurity Program information will be updated and there will be much continued communication to breeders as we start the New Year in 2021. If you have any questions at this time in regards to the ASR Futurities, please contact Patricia Edwards at 859.259.3899 or email p.edwards@asha.net.