With 15 Chances to Win, How Could You Lose? Get your tickets today!

Learn more about the 2020 Stallion Sweeps!

Already logged in to ASHA.net Buy Your Tickets Now!

ASHA Thank You Letter to My Saddlebred: CH Hotrod Harley 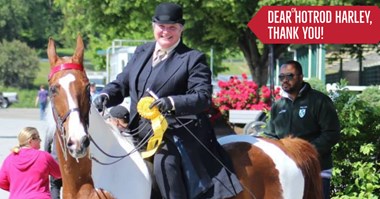 Thank you, Harley, really, for everything.  After 40 years of riding Hunter/Jumper and dressage, I wasn’t at all sure I wanted to ride anymore.  Our horses had either died, or were retired, and I was at a crossroads.  I knew I didn’t want to jump anymore, but sport horses were all I’d ever really known.  Now, injuries and age were taking their toll.  Then one night in August, I booted up the computer to watch the H/J Derby Finals.  I was a week early.  Instead, I caught the stream of the Saturday night 5-Gaited World Championships in Louisville, Kentucky.  I was riveted.  Years before, when I had my horse at a local H/J show, the Evergreen Classic, I had watched an American Saddlebred demonstration during the Gran Prix.  I tracked down the trainers who had put on the demonstration, Les and Troy Corbett of Corbett Stables, and soon found myself having my first saddle seat lesson on CH Hotrod Harley, just a few weeks before my 50th birthday. 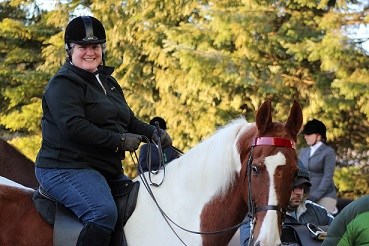 Harley, you were a saint.  You took care of me.  The farm had a Harvest Festival going on, complete with pumpkin cannons and people popping up over the wall of the arena to look at the horses, and you didn’t even blink.  You and Troy were an amazing team, working together to teach me a whole new way of riding.  You made sure I remembered that riding was, first of all, fun.  I think I’d forgotten that.  You were quirky, snarky, and above all, safe.  It wasn’t until much later that I found out that you were a Scripps Miramar horse, bred by them, had been in their calendar, and were by their stallion, Chubasco.  And the more I got to know you, the more I realized how like your opinionated sire you were.

The stories I was told about you over the years were legendary.  How as a young horse, Les thought that you’d never been a junior or an amateur horse, yet how later in life, you decided that teaching was your preferred situation.  Stories of all the people who had owned you and loved you.  The stories of all the people you taught to ride and had important places in their lives.  Watching you take an 8-year-old girl around a schooling show warm up ring at her first show.  The ring was 3 layers deep in horses.  Once you realized she was frozen, you wove yourself in and out of traffic, putting yourself on the rail when you could, and finding gaps to pass, all by yourself.  Everyplace we went, people would come over to ask about you, and tell me some story of how they had known you, and what you had meant to them.  You made quite an impact on anybody who met you! 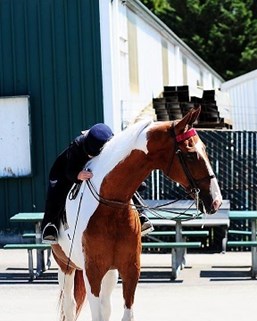 You got me back in the show ring too.  I never thought I’d show again, but there we were.  You showed me the ropes and took care of me when I was nervous.  And I remember most of all, turning to track right, you hitting your show trot (knowing it was the last direction before line up), and feeling myself grin as we blasted down the long wall towards home.

Troy Corbett and I talked often about me buying a horse.  But it really came down to the fact that I wanted you, Harley.  But you weren’t for sale.  You been with the Corbett’s since you were 2, through various owners, and now you belonged to them officially.  They were not parting with you.  It took me a year to convince Troy to let me lease you.  We finally struck a compromise, and Troy and I shared you.  Thank you for the trail rides, (you Were. Not. Thrilled.  You made it very clear that you were humoring me).  Thank you for the rides and drives, the shows, and for the parades, the exhibitions, and for one memorable afternoon riding on the Emerald Downs Racetrack!  But especially for the times when I just needed a horse to talk to.  Thank you for those dark evenings spent just brushing you.  You were so good for my soul. 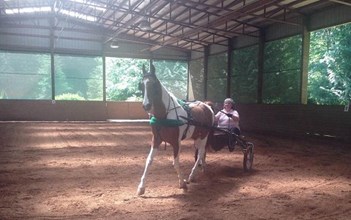 You left us two years ago, at the age of 27.  One memory of that time really stands out.  I walked into the vet clinic barn and looked at your stall.  You weren’t there.  I panicked.  I spun around, and you were in the stall across the aisle, ears up looking at me, with your trademark ‘over here, stupid’, look on your face.  The vet tech came out and laughed.  She said she’d taken him for a walk, commenting that he’d been ‘pretty spicy’, (yep, that was you!), and when they came back, he refused to go into his stall, but thought that the stall across the aisle might be tolerable.  Harley, that was you, opinionated to the last. 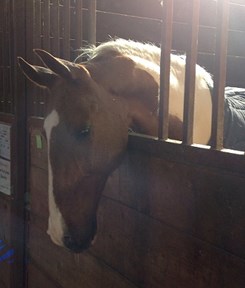 Harley, I miss you so much.  You were everything I was ever told about Saddlebreds.  Personable, versatile, kind, and quirky.  I have had Thoroughbreds most of my life, and they tended to be aristocratic and aloof until they got to know you.  I have since decided that Saddlebreds are just Thoroughbreds with more snark.  You certainly were.

It wasn’t until I’d been with you for a few years that I realized an amazing coincidence.  Growing up, one of my favorite books had been one that had been my mother’s when she was growing up.  It was called Harlequin Hullabaloo, by Dorothy Lyons.  It was about a brown and white pinto American Saddlebred named Harley.  Funny.  Now I was riding my own brown and white Harley.

Thank you, Harley, for fulfilling my childhood dream, and keeping me riding at a turning point in my life, and above all for just being you.  A perfect American Saddlebred.

Write a Thank You Letter to Your American Saddlebred

This month ASHA will be featuring a series of special Thank You letters between some of our favorite Saddlebred combos across disciplines and levels of competitions! Regardless of how you are involved with the Saddlebred, they make us feel whole, fuel our fire, and teach us invaluable lessons about life and ourselves. This series is a way to share not only the love we have for our American Saddlebreds but spotlight all the areas of our life that we are grateful to have our four legged best friends awaiting us in the barn. Learn more about this special feature and contest today!