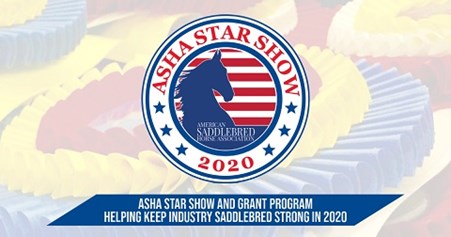 ASHA has created a multitude of new initiatives for 2020, but by far two of their best rollouts have been the Stars Shows and its grants.

Stars Shows were created to offer organization and benefits to shows that were not directly tied to the US Equestrian Federation. David Mount, executive director of ASHA, said the goal of these shows was to offer consistency and to provide additional support.

“We saw a need to offer some kind of consistency to these open shows. We took a program that the American Morgan Horse Association already put in place, they have their own star show program, and we worked with them to adapt it to the Saddlebred,” Mount said.

Mount said there are other perks of the shows, such as marketing assistance and the chance to accumulate CH points. Additionally, he said there is an opportunity to qualify for the World Championship Horse Show through this program.

Along with the shows comes the ASHA Horse Show Grant. 100% of the application fee for the Star Shows goes toward the grant, which is given to a show that has a great need. The grant can be either $500 or $1,000.

Bob Funkhouser, chair of the Saddlebreds Across America Committee, said the goal of these grants is to help build up the beginning and middle market for Saddlebreds.

“The focus is on that middle market horse show. Without these smaller middle market shows, shows like Louisville and Lexington are going to die. It’s that lifeblood pumping into them from smaller areas,” Funkhouser said.

“Those are the shows that need the most help, too. It’s a more wholistic approach,” Mount said. “It’s a new way of looking at things because we haven’t been that involved in the past.”

Funkhouser said many of the grant recipients would be able to use the money to waive cost for exhibitors or to pay for licensed judges. It would also be the chance for smaller markets to compete with one another comfortably.

“It’s for whatever that show needs help with, and we hoped to set it up. We didn’t want it to be a lifelong thing, but we wanted to help to get them on their feet,” Funkhouser said.

Mount said 11 grants were given this year, with all of them being outside of Kentucky and its region.  He said he was proud to give grants in areas like California, Minnesota, Illinois, New Jersey and Ohio. The California show was the first show in their state to occur post quarantine guidelines being lifted.

“There were the states where we gave the grants that I was really happy we were able to give to. They were states where they needed our help,” Mount said. “It was nice to be able to support our community from the East Coast to the West Coast,”

Roy said their grant was used to waive the cost for a stall for Academy horses. She said she sees Academy as a gateway into the Saddlebred world, and by waiving the cost; they are making it easier for young riders to participate.

Merin Maggi of Maggi Stables was one of the trainers that took advantage and brought Academy entries to Silicon Valley Horse Show. She said since the grant was able to waive the cost of a stall it was able to grant the opportunity to more kids to attend horse shows.

“It really allowed us to bring a horse and some kids that were new to the program, and it made it capable for them to actually go to the shows,” Maggi said.

Maggi said the kids that participated in the show with Academy horses came back and wanted to dedicate themselves to becoming more serious riders.

“It basically lit a fire in them and made them want attend more shows and to continue to do this,” Maggi said.

Maggi said she also agrees with this sentiment, she said with very few shows in California, the price of hauling a horse is expensive. This is why she think the grant was great benefit and incentive for Academy riders to be at the shows.

“Having that grant for that horse to make it less expensive was a really big deal,” Maggi said.

Roy said she wants even more young riders to take advantage of the deferred costs at their next show. She added she hopes in the future if they are to receive the grant again she wants to defer even more costs for their exhibitors.

Mount said he hopes with the success of this year’s grant that next year they will be able to give and help more. Funkhouser mirrors this sentiment, and he said it’s all about the longevity this will bring to the Saddlebred.

“The grant is to help the grassroots, and [the grassroots] is where [our industry] struggles. The beginning and middle market [at the local level] doesn’t have us [on the ground] helping it but now it does in a way,” Funkhouser said.

Mount said he is adamant to get more money into the program, preferably through sponsors. He said the program needs more money so they can fund more shows and give more money with the grants.

“We’re building a foundation here and I want it to go on to build bigger and better things,” Mount said.