During the July board meeting of the American Saddlebred Registry (ASR) this weekend the Board voted to approve and accept the champion designation, CH-SH, program for American Saddlebred Sport Horses. In addition, the point program for earning a CH-SH designation in eventing passed and several historical CH-SH were awarded. The ASR Board also unanimously voted to award the CH-SH designation to all past and future winners of the ASHA Wing Tempo Award.

General Language of CH-SH Program passed by ASR Board vote:

The following language is for all SH disciplines:

1. Eligibility Requirements: To be eligible, a horse (living or deceased) must be a registered American Saddlebred and must have earned the necessary points (see Saddlebred Record Point System); applicant or owner must be a current ASHA member.

2. Number of Points & Show Requirements: To become a Champion in any listed division, a horse must have earned 15 points at the division’s governing body(ies) licensed competitions.

3. Time Limit on Points: There is no time limit on earning points.

4. Applications: Applications must be made on the proper form and must be accompanied by the application fee of $75.00 and two photographs. In the case of a deceased horse, the photograph requirement may be waived if photos are unavailable. Application may be submitted by the owner, agent, or other person. A $100 rush fee will be assessed for priority processing.

5. Violations of Governing Body Rules: If an owner or owner’s agent has been found to have been in violation of the Drugs and Medications Rules at a specific horse show, no points will be earned by the horse in question for that entire horse show. Any other violations of the rules (as adjudicated by the governing body, such as USEF) and/or correction of official show results may result in loss of points or championship status.

6. Approval of Champion: When a horse has been approved as a Champion, the applicant will receive the Certificate of Championship. The prefix CH-SH will be permanently added to the horse’s name on ASR records; a new registration certificate will be issued to the Owner of Record upon presentation of the original certificate.

7. Permanent Status: The designation of Champion is permanent and irrevocable, except in the case of violation of governing body rules or a correction of official show results (see Rule 5 above).

8. Duplicate Certificates of Championship: $35.00 each.

9. Refund Policies: Refunds will be made only if (a) two or more applications have been received, or (b) at the discretion of ASR. The application with the earliest postmark will be accepted.

10. Automatic CH-SH will be granted to any horse named to a US FEI team for their respective discipline.

ASHA Equine Welfare Advocacy Committee (EWAC) Committee Chair Kathie Dunn Jacobsen presented a number of proposals for the newly approved CH-SH program which awards the "CH-SH" designation to our sport horses who are competing against all other breeds and continue to show outstanding performance.

Ten years ago, the inaugural Wing Tempo award was given to its namesake at the 2011 convention. Wing Tempo and owner Shirley Sobol set the standard in Competitive Trail Riding (governed by the North American Trail Riding Council (NATRC)) by winning their top award 22 times, and setting the record of 20,710 miles ridden while in his early 20's. That record was finally broken by Elmer Bandit who had to wait until he was 37 (incredible in itself) to compile the mileage. Jacobsen stated that "it is appropriate that the very first CH-SH be awarded to Wing Tempo who raised the bar as well as the recognition of the Saddlebred as a sport horse." 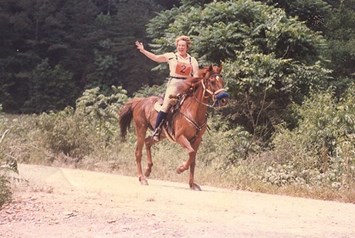 The board voted to automatically award any winner past or future of the CH-SH Wing Tempo Award with their own CH-SH. The following horses (and their disciplines) were awarded the CH-SH:

Additionally, EWAC researched and presented a candidate for a historical CH-SH. The ASR BOD also awarded CH-SH Rex Rysdyk the designation for twice completing the grueling 300 mile U.S. Cavalry Endurance challenge in the 1920's. CH-SH Rex Rysdyk joins his full sister, WGC CH Jonquil in the championship ranks. He not only competed in endurance with his amateur owner / trainer / breeder Mr. R.T.M. McCready, but was also known as a five-gaited show horse. As Jacobsen quipped, "Saddlebreds can do it all, and with style."

Point programs for endurance and eventing were presented, with eventing passing and endurance tabled until the fall meeting. More information on the specific points for each discipline will be forthcoming as program details are finalized in the near future.

1. To achieve CH-SH status, a horse must earn 15 points at USEF and/or USEA licensed competitions.

2. Points may be earned at all levels of recognized competition, Beginner Novice and above.

Jacobsen cited the hard work of her committee as well as individuals in each discipline. She stated, "I would like to thank Barbara Molland and Betsy Boone for believing in us for all these years. I tasked the groups to not only come up with a point system for their discipline, but to also ensure that it fit the current 15 point guideline for show ring CH and CH-EQ as well as making each discipline equally difficult to achieve a CH. We wanted the CH-SH to be respected not only within the breed, but also within the discipline. I can not thank the hard work of Rachel Kelley Barron, Tina Batchelor, Sara Fraker, Lisa Davies Siderman, Jen Springer, Jody Swimmer, Karen Felty Thompson, Nancy Trent, and Shelah Wetter enough. These ladies all firmly believe that our horses are athletes and they found common ground between all of the disciplines. I look forward to presenting the updated endurance point system along with dressage and Western Dressage at the next ASR BOD meeting."