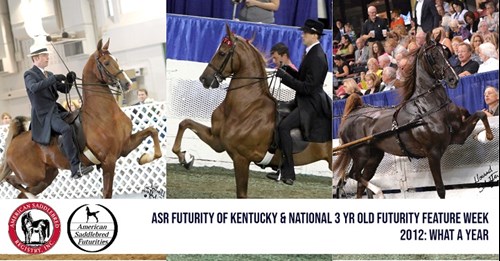 The history of ASR Futurity graduates reads like a Who’s Who of some of our greatest performers. Year after year, many of those champions and ribbon winners have gone on to become household names. Breeders thought enough of their bloodlines and potential to nominate them and keep them up-to-date in the program so they could compete for healthy prize money on the biggest stages locally and of course, Freedom Hall. More often than not, they did not disappoint those visionary breeders.

Looking back, 2012 was a particularly good year for the National Three-Year-Old Futurity. Headlining the world’s champions from that year were Fox Grape’s The Tiger Lily (five-gaited), HS Daydream’s Heads Up (three-gaited), and HS Baby Steps (fine harness). All three eventually earned enough points for “CH” status as they won and continue to win championship after championship. 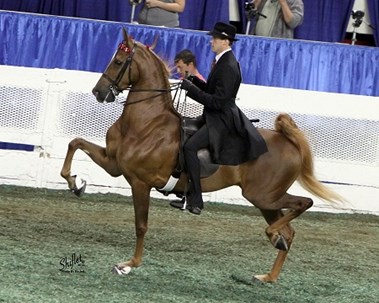 The Via family’s Fox Grape Farm was the breeder of The Tiger Lily, a daughter of (SA) Dorian Wild Temper and their former reserve world’s champion gaited mare, Callaway’s Carnation (BHF). In addition to The Tiger Lily, Carnation produced world’s champions Our African Violet and CH Fox Grape’s Dandy Lion. The Tiger Lily’s show career began under the direction of Steve and Tiffany Wheeler, with Steve riding her to the World’s Champion National Three-Year-Old Five-Gaited Futurity honors and earning $9,445 in the process. And talking about a great class, the next three horses in the ribbons behind her were Beaucoup Of Blues, CH Callaway’s Sweet Thing and CH Moonlight Memories.

When Tre` Lee first hit the ring with HS Daydream’s Heads Up, everyone knew this was something special and he had a right to be. Bred by Scott Hagan, Heads Up is by Undulata’s Nutcracker out of one of the greatest producers of all time, A Daydream Believer (BHF). With a neck that went on forever and extreme athletic ability he was built to be a walk-trot sensation. 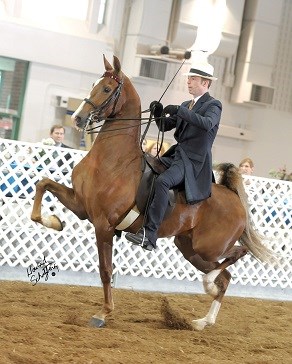 A world’s champion with Lee as a two-year-old, Heads Up earned $9,320 as the National Three-Year-Old Three-Gaited Futurity World’s Champion and that same year, they gave a shot at trying to become only the third three-year-old to win the Three-Gaited World’s Grand Championship. They fell one place short, taking reserve world’s grand champion honors behind CH Platinum Moon and Danny Lockhart. Again, talk about an all-star cast, behind Heads Up that year in the National Futurity were Undulata’s Secret Rendezvous, Say Yes To The Dress, and CH Soquili’s Curious George in the top four spots.

As a four-year-old, Heads Up was the Three-Gaited 15.2 & Under World’s Champion and again the Three-Gaited Reserve World’s Grand Champion, this time behind Annika Bruggeworth’s Sir Silver Knight with Melinda Moore in the irons.

Debbie Foley would eventually take over the training and in 2014 she won the Three-Gaited National Championship and over 15.2 stake at the UPHA/American Royal and again won the national championship in 2015. Before that second Kansas City title, owner Scott Hagan who had a few shows under his belt with the star, won the World’s Champion Three-Gaited Over 15.2 honors that August. With several 2016 titles, Hagan once again rode into Freedom Hall with his homebred product, earning HS Daydream’s Heads Up’s third reserve world’s grand champion title, this time behind CH Don O’Neil and Chris Reiser. Hagan also piloted the gelding to his third Three-Gaited National Championship that year. The following year we find two more reserves at Louisville and a fourth national championship.

Still shooting for the ultimate prize, Hagan and Heads Up added another World’s Champion Three-Gaited Over 15.2 title to their collection last year and another Three-Gaited Reserve World’s Grand Championship and no doubt we’ll be seeing more from them this year as shows resume.

Hagan not only had HS Daydream’s Heads Up to be proud of in the 2012 National Futurity, he was also the breeder of HS Baby Steps who won the fine harness division that year with Lionel Ferreira driving for Ashlyn Farms. Baby Steps is sired by former Futurity standout Sir William Robert out of reserve world’s champion I Am The Dream (BHF). 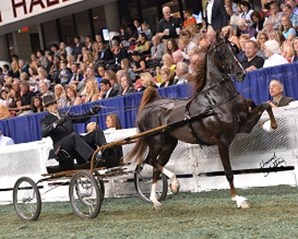 Her career began with Walden Bullard driving her to the Two-Year-Old Fine Harness blue at Rock Creek in 2011, following by Ferreira winning the World’s Champion Two-Year-Old Fine Harness Mare honors. Her National Futurity World’s Championship and $9,545 paycheck in 2012 came at the expense of challengers like Bump In The Night, Renaissance Man’s Medici and Talk Is Money in the top four prizes.

Misdee Wrigley Miller was looking for her next harness sensation and thought she had found it in HS Baby Steps. After the purchase, Larry Hodge brought her out the next year and collected a $4,928 check in the ASR Four-Year-Old Fine Harness Sweepstakes on their way to World’s Champion of Champions Junior Fine Harness honors that year. Miller took over the lines that same year winning at the Alltech National Horse Show and the amateur qualifier and Amateur Fine Harness National Championship at the UPHA/American Royal.

It took a lot of convincing but Hodge insisted that Baby Steps should be trimmed and boy did that decision turn out to be a good one. The first of many trips to the Louisville winner’s circle as a walk-trot horse came in 2014 as Hodge rode her to the Three-Gaited Over 15.2 World’s Championship. From there on it was all Miller in the irons, including the ladies over 15.2 and Ladies Three-Gaited National Championship that same year.

Indeed, 2012 was a year to remember for Futurity champions who went on to greatness.