Written for the ASHA by Janet Thompson

This article is intended to introduce you to those disciplines, and to start conversations about which horses might be best suited to careers in one of those disciplines.  Subsequent articles will feature particular disciplines, with interviews of some of the riders and drivers who are enjoying their Saddlebreds in the sport horse world.

First, however, let’s agree on definitions—what is and what is not a sport horse discipline for our purposes.  Historically, the sport horse disciplines included those disciplines that are part of the Olympic tradition—Jumpers, Three-Day Eventing (also known as Combined Training), Dressage.  Over the years, distance riding, Combined Driving, Carriage Driving, Western Dressage and Reining have been added to the list.  While the Hunter division is not a recognized Olympic discipline, the Hunter horse that competes in a division with both flat and over fences classes is also considered part of the Sport Horse world.  Finally, because of the connection to work done outside of the arena setting, both Trail (obstacles) and Ranch Riding may be viewed as Sport Horse disciplines, since the obstacles and patterns they include attempt to replicate real-life conditions outside the arena.

Although clearly not saddle seat, our Saddlebred Western Country Pleasure and Saddlebred Hunter Country Pleasure divisions are not and should not be considered part of the sport horse disciplines. Why not? In large part, it has to do with form and function.  These horses, while worked using non-saddle seat equipment, perform in much the same way as their saddle seat counterparts—they perform distinct gaits on the rail and have no additional tasks—ones that might replicate riding experiences outside an arena.

These Hunter Country and Western Country Pleasure horses form an enormously important component of our presence—both in competitions and in attracting riders and buyers to the Saddlebred.  These individuals are often chosen for these disciplines because they may be less highly-keyed, have less or a different style of motion, a neck that either isn’t as long or put on as high, and, related to those attributes, may cost less money. Since they compete in the Country Pleasure division, their shoeing requirements are different—no pads—and they may not wear tailsets, and thus they are also easier for the amateur/owner/trainer to maintain.  But, they are not part of the sport horse tradition.  The sport horse disciplines are, however, increasingly important marketing opportunities for our breed.

Several years ago, Julie Lynn Andrew wrote an article, “American Saddlebred Bloodlines for Sport Horse Disciplines,” which was published by the ASHA.  It appears here again to refresh our collective memory about why and how the Saddlebred can play a vibrant role in both breed-restricted and open sport horse disciplines.

Some of us, who are “of an age,” remember a time when the greatest open jumpers in this country were Saddlebreds.  During the 1950’s and 1960’s, for example, those competing and winning in the Puissance classes, often with a vertical fence six feet tall or higher, were Saddlebreds. Later, in the 1970’s and 1980’s, fewer Saddlebreds were seen in the sport horse disciplines in the United States, despite that our horses had an abundance of the very qualities prized by sport horse exhibitors—shoulder motion, hocks, attitude—good thinkers and game--, and the ability to wear himself—to see a fence, to raise up and perform collected work.  At the same time, the heavier-boned European Warmblood was making an appearance in this country and was making a run at the top spots in the sport horse disciplines.  Over time, these larger horses were replaced by a “lite” version, one with more Thoroughbred blood, one that was more suited to lady and amateur riders.  And, this “Warmblood Lite” was remarkably similar to many of our Saddlebreds, which also trace back to the lighter-boned Thoroughbred.

Over the next few months, we will bring you the Saddlebred Guide to the Sport Horse World.  Each installment will focus on one of the disciplines that are found under that umbrella.  Through this series we hope to provide you with a basic understanding of what each discipline involves; what about our horses makes them well-suited to that discipline, and who is actively involved in that discipline.  With that information, as well as an opportunity for follow-up Q&A, we hope to dispel myths and encourage you to jump in the pool.  The water is perfect!! 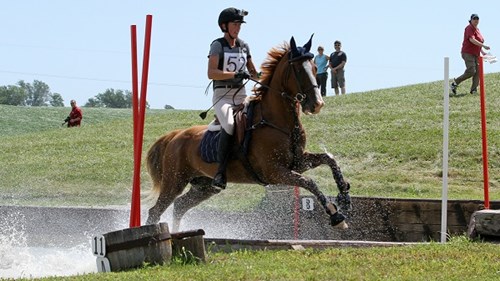