Saddlebred Strong Series: A Wounded Warrior's Journey Back to the Barn 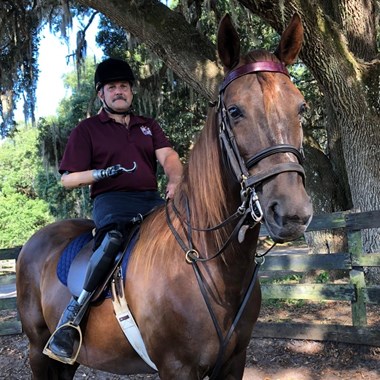 Rich Cicero grew up surrounded by horses. His dad made a name for himself in the Hackney Pony industry, and Rich grew up showing his dad’s ponies. While, due to the crossover between American Saddlebred and Hackney shows, Rich had always been exposed to the Saddlebred breed, but he hadn’t had much of a chance to work directly with them until he was talking to Jan Lukens as a teenager. She made the point that, since he drives ponies, why wouldn’t he also ride horses? This offer from Lukens is what started Cicero’s Saddlebred Story and deepened his connection to the breed. Always a pony man at heart, this skill development via the American Saddlebred helped him grow in his feel and understanding the “whole picture”when training a horse, no matter the breed.

As an adult, Rich had a long military career. He was an Army Special Operations Intelligence and Communications Sergeant, and had assignments with the 82nd Airborne Division, 7th Special Operations Command, and 173rd Long Range Surveillance and Recon Detachment. However, that didn’t stop him from staying involved in the horse world throughout his adult life. His daughter Scarlet learned to ride with family friend Natalie Hamer of Virginia, who is married to his partner from his time working with  the Virginia State Police. Here, he spent lots of time around Saddlebreds and gained valuable experience. Rich elaborates on his time with Natalie, saying, “She was a great resource to keep me active with breaking young horses with her and helping with problem solving for her older horses.”

Rich retired, but was then contracted to the military as an IED Detection Dog Handler and Trainer. In August of 2010, he was walking a dog when he stepped onto a landmine bomb, which exploded and caused him to lose half of his right arm and half of his right leg. He was able to get prosthetics, and did rehab at the Walter Reed National Military Medical Center in Bethesda, Maryland. However, he is quick to point out that rehab is not simply a one-and-done process, saying, “Rehab is an ongoing life development even though it isn't in a structured facility.  Rehab should give the user the tools to enhance skills in daily living as I do now with many things they can't teach, like the horses.” Rich eventually ended up in Florida, where the weather was best suited to his prosthetics.

During his recovery, his father had been consistently pushing him to get back into the horse industry, and finally Rich agreed to bring one of his dad’s Hackney ponies to Florida. The doctors said that there was no way that Rich would ride or drive again - after all, he was missing half of two limbs, limbs crucial to riding and driving, but at least he could gain the emotional benefits of being around the animals that had always brought him such joy. Enter Lark Henry, Bobbin Hollow Farm head trainer. Lark grew up in Massachusetts with her parents, who had established Bobbin Hollow, and Rich had grown up in New York - their parents knew each other well, so naturally they had crossed paths. So, when Rich and his daughter Scarlet ended up in Florida many years later, Bobbin Hollow was the obvious choice for his dad’s pony. 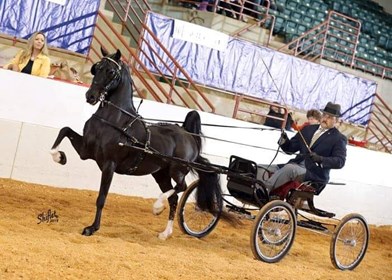 A horseman place is always in the barn. Bringing a pony back to Florida was the encouragement he needed to get back in the barn and connected with horses again. Before long Lark had him back behind his pony doing the work himself. It was just what Rich needed, long lining and jogging ponies again!  While doctors are shocked that he can feel the bits and the pony’s mouth through his prosthetic arm, Rich says it’s just like riding a bike, and that instinct kicks in every time he gets behind a pony. At Pro-Am 2019, he entered the ring for the first time in over 20 years behind his dad’s pony, High Stepper’s Simply Awesome, and earned two reserve ribbons.

Rich doesn’t want everything he has been through and triumphed over to be in vain - he wants to give back. Being able to not only drive again, but actually return to the show ring with the beautiful harness pony High Stepper’s Simply Awesome has been an important step in rebuilding his life after his injury. He and Lark knew that they wanted to share his experience with others who could also benefit, such as retired military communities - as a firsthand witness to how horses can reinvigorate a life, Rich wanted to give others in similar positions the same experience.

This idea recently came to fruition during the Summer Fun Show in Ocala, FL. Through Rich's efforts and the additional support of Bobbin Hollow Farm, Avalon Stables and other Saddlebred farms in the Tampa area they brought a special Veteran’s and Memorial day celebration to the show and created helping connections between farms and military families. There was driving, riding, and horse care demonstrations, as well as hands on access to horses and resources available to find facilities near them where they could learn more. Check out this video of Rich getting in the cart behind the great American Saddlebred ambassador White Lightning Blues (117243) to promote this special initiative on the local news.

Rich’s determination to rebuild his life after his injury found the perfect partners in the ponies and horses he loves, and with their help he is healing himself, as well as helping others to do the same.  The American Saddlebred Horse Association is proud to have a member of our community bringing together the show horse and military communities to give back and grow both for the better!