We are pleased to announce the April 2019 ASR Diplomat of the Breed sponsored by Freedman's is CH Highpoint’s Supreme Thunder (101778G)! “Scooby” as he is affectionately known, is an American Saddlebred that exemplifies how life is about living, loving and finding your joy! 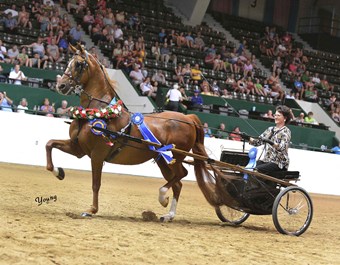 Scooby is a sweet, happy, radiant, and naturally talented American Saddlebred that has forever changed and touched many lives. Through his magnetic and dynamic personality, he has become an outstanding representative of the breed. He is a 24-year-old gelding by CH The King of Highpoint and bred by Dr. Gene Scott. He has been owned and loved by Manahan Stables in Minnesota for 18 years. He is once again looking forward to hitting the show ring this year to bring more happiness and love to the world. Even at his age, in his heart and head, he’s still in his prime and wants more than anything to be in the ring to thrill the crowd and have them cheer him on.

The louder the crowd would cheer the bigger he gets. Scooby lives to perform for his fans. One example is in the large Minnesota coliseum announcer Guy Warner would ask the crowd to put their hands together and cheer - Scooby then grows 6 inches and trots boldly down the rail to illustrate to thousands why Saddlebreds are called the peacock of the show ring. This same horse, after being untacked gently greets a young lady paralyzed in a wheelchair and allows her mom to move her paralyzed hand down his sweet face. 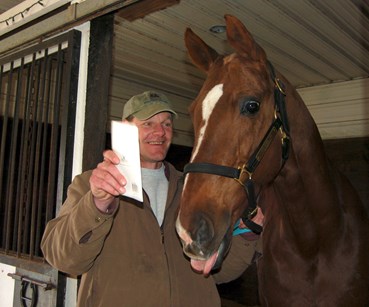 His magnanimous personality sparks happiness inside anyone who has had the pleasure to share the ring with him. In this challenging world filled with heartache and sadness, it’s been a real blessing that he’s been able to share his talent, happiness, and power with so many people over the years.

The ability and willingness to connect with people have enabled him to take over a dozen different exhibitors down victory lane. He’s allowed the best and also the beginners to share in his over 60 horse shows. His main driver over the years has been Sally Snyder Tesch. She has expertly guided him to a reserve national championship and well over a dozen year-end Country Pleasure Driving plaques from ASHA. Always wanting to share him, this incredible bundle of talent, love, and power has also driven down victory lane with Kris Swanson Schones, Barb Hendrickson, Dawn Moore, Jennifer Leaser, Keith Matzske and many more. 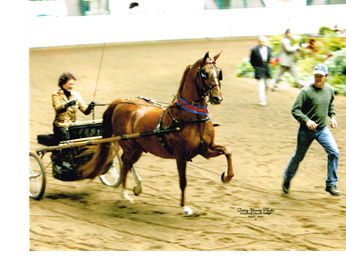 One of his favorite shows is the State Fair because it allows him to meet thousands of people.  Raymond Manahan shares, “To say people are drawn to his stall is an understatement - in fact, to try to let him rest for 30 minutes (between his performances and “petting” time) we placed the show cart in front of his stall with “wet paint” signs on it and roped it off…. well that didn’t stop the crowd from climbing over ropes and then the cart to reach into his stall and pet him.”

As a breed ambassador Scooby’s performed at state fairs, county fairs, and horse expos. He loved standing in the barn aisle while hundreds circled around to pet him and take pictures. He caught the attention of the Fox TV news crew and they came to film him for their morning show. Scooby’s last appearance at Horse Expo was so impressive that members from every breed came to meet him and comment in awe on his ability, beauty, and brains. Highlighting the uniqueness, only a Saddlebred can possess, the heart of a show horse, the braveness of his predecessors and kindness of a Labrador who loves to be petted. 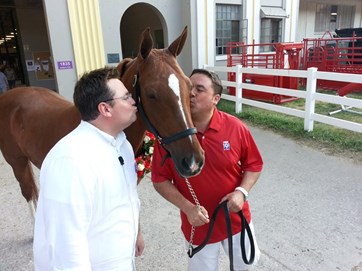 The American Saddlebred Registry is proud to honor CH Highpoint’s Supreme Thunder for his contributions in breed promotion, community service and the joy he has brought to the many lives he has impacted with his years of partnership in the show ring. Scooby makes us proud to have such a charismatic and dedicated individual out there working to #SharetheSaddlebred and educate the public on the American Saddlebred! If you have an American Saddlebred that should be the next ASR Diplomat of the Breed, nominate them today!