Saddlebred Strong Series: Staying the Course and Perfecting the Art of Partnership

Equitation riders practiced patterns for their National Championship Finals; trainers schooled horses and riders for their next classes at this USEF A-rated show; horse show volunteers brought boxes of ribbons, trophies, and other supplies into the judges’ box in center ring, and facility personnel prepared the area for the evening’s performance.  And, all the while, Lily Callahan calmly led her pony, “Cookie dough,” from her place, bareback, atop her current equine partner, “Moose,” threading their way through traffic in the National Equestrian Center arena, the site of the St. Louis National Charity Horse Show in late September 2018.  Calm and singleness of mind radiate from this teenager from Harrisburg, Missouri.  Those traits have served her well, taking her from backyard rides on ponies and lessons on any school horse available to national championship awards with a horse she trains herself. 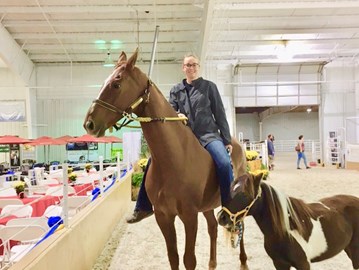 Lily comes by her involvement with horses honestly.  Her mom, Judy, had a strong background in horses when she decided to move from New England to central Missouri to attend William Woods University.  William Woods, known for its high-quality Equestrian Studies degree program, exposed Judy to all disciplines and multiple breeds, as she obtained her college education.  William Woods’ strong connection to the world of the American Saddlebred also led to Judy’s career stop at nearby Callaway Hills Stables, nursery and home to multiple generations of World Champion American Saddlebreds.  While at Callaway Hills, Judy opened an animal shelter under the direction of the owners, the Weldon Family, and cared for the guard dog entrusted with the protection of World’s Grand Champion and multi-World Champion sire, CH Will Shriver.

Judy’s work with dog rescue at Callaway Hills led to her rescue work with horses at home.  Thus, by the time Lily came on the scene in 2001, the family had experience with multiple breeds, including Shetland Ponies, Thoroughbreds, Arabians, POAs, Appaloosas, and various kinds of draft horses.  When Lily was a toddler, she was already accompanying her Mom to the barn, where she cared for an older pony, “Dally,” that her Mom had rescued.  Dally lived out his life as a member of the Callahan household, under Lily’s care.  However, the first pony that was Lily’s and Lily’s alone was Cookiedough, whom she received for her fifth birthday at the annual Septemberfest celebrations in her hometown of Harrisburg.  Cookiedough taught Lily the basics of staying on top of the horse and still travels with Lily to shows, now as the boon companion for Lily’s current showring star, Moose. 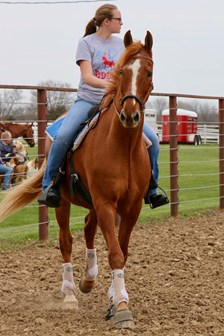 In between Cookiedough and Moose, Lily began taking riding lessons as soon as possible with Kris Wallace, the owner/instructor at Columbia Equestrian Center.  Kris, also a William Woods graduate, teaches a variety of disciplines and always has a smorgasbord of breeds from which to choose for her students.  Thus, Lily’s exposure to horses grew exponentially under Kris’s tutelage.  She rode Quarter Horses, on which she learned to jump; a Hackney Pony, on which she began her love affair with the energy of these well-known show ring stars; and finally, Kris introduced her to the American Saddlebred, and a five-gaited one at that!  In her first ride, she transitioned through all five gaits and was in love with the power and attitude that the horse presented.  Her first experience has been confirmed since with the Saddlebreds she owns or has ridden showing complete willingness to do the task presented and do it giving 100% of themselves.  That willingness was first confirmed when, at the request of the five-gaited horse’s owner, she helped to convert the horse into a western horse, including teaching him to neck rein.

Some people are fortunate to not experience heartache and loss until later in life.  Lily learned early that her love of horses sometimes was tinged with sadness.  The second five-gaited horse she rode at Kris’s barn was Bob, whom Lily rode first when she was eight or nine.  She fell in love with Bob and, although her parents tried to buy him, they couldn’t afford the asking price.  When Bob left the barn, Lily was heartbroken.  About a year later, the owners called and said they would sell him cheaply because he had developed EPM. Bob, who taught Lily that loving your horse often means daily hard work and meticulous care, eventually made his way back into the show ring with stage 4 EPM.  Bob’s show ring career was short-lived, but Lily continued to care for him ever after.  She credits the connection between them, with Bob telling her that he wanted to continue to fight, as a once in a lifetime experience.

Lily continued to expand her riding experiences over the next couple of years, showing a couple of mares who required even greater finesse with the bridle and often stretched Lily’s determination to get inside their heads in order to fully develop each horse’s abilities. When one of the mares bowed a tendon, requiring her to step back from showing for a spell, Lily returned to jumping, under Kris’s direction.  One lesson was on an off the track Thoroughbred mare that was hot, hot, hot.  Lily rode him very well and Kris, who had a Saddlebred that she was eventing successfully, encouraged Lily to seek out a Saddlebred that she could jump. 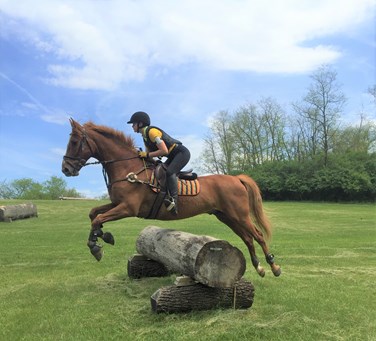 Lily began an online search for just such a horse.  The first horse shopping expedition, to neighboring Iowa, did not produce “the one.”  Then, a friend sent Lily a Facebook post about a horse in Wisconsin.  Lily saw Moose’s picture, convinced her grandparents to lend her the purchase price, and, in October 2015, she and her parents, with the horse trailer in tow, headed to Wisconsin.

It didn’t start out like a fairy tale.  That first ride in Wisconsin did NOT go well.  Lily left the farm where Moose lived in tears, thinking she had wasted her family’s time and that this was not the horse of her dreams.  But, by morning, fate, or maybe just Lily’s heart, had stepped in and Moose became a Callahan.

Moose, whose registered name is Royal Crest’s Granite Permission, was bred by the well-known breeders, Bruce and Rusty Rademann, and was part of a group of yearlings donated by the Rademanns to a group of 4-Hers.  Brianna Kingsley (Bre) started Moose’s education, using him as her trail riding horse and then teaching him to jump.  She and Moose attended many 4-H horse shows, where Moose also competed successfully in the games classes, including barrels and poles.  Bre, another young person not content to color between the lines, also roped cattle and Moose added that talent to his growing repertoire.  When Bre left for college and neither her finances nor time permitted her to keep a horse, Moose became a member of the Teehan family, where he began his eventing career.  Lily has continued to expand Moose’s skill set, along with her own, doing poles and barrels, trail riding, eventing, and fox hunting. 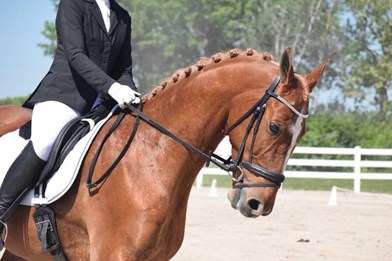 Since owning Moose, Lily has been the only person to ride him.  During their first year together, they continued at Columbia Equestrian Center but since then have moved to a private barn where Lily works him entirely by herself.  Although she continues to take lessons and attend clinics with professionals, she and Moose are learning together.  They are learning more than just skills, honing their ability to perform a canter half pass or perfect their timing on a big combination.  They are learning about each other.

When Lily first met Moose, he was quiet and almost shy.  Over the last three years, his personality has blossomed, in large part because of the connection he shares with this tall, energetic teenager.  He has also taught Lily about herself.  She notes that he is a perfectionist, always trying to get it “right,” and getting upset with himself if he doesn’t succeed.  She recognizes now that her personality mirrors his, in some respects. She enjoys having fun and relaxing but, when it comes to school or riding, she has to be perfect.  However, by knowing Moose, and understanding his personality, she has learned that horses and people don’t have to be perfect.  Sometimes they need to be comfortable with what they are doing, and that’s ok.  Every horse, like every person, has his or her own calling and natural talents and abilities.  Because of Moose, Lily has learned life lessons that many adults never do. 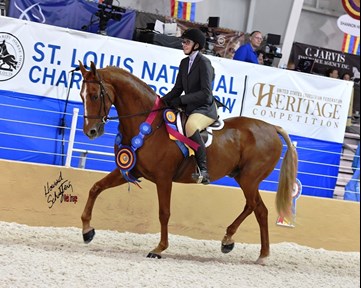 Lily has yet to finish high school but, when that is behind her, she will go to college and pursue both an undergraduate and graduate degree so that she can pursue a career in embryology, focusing her work on the wild horse population.  She hopes that she will be able to continue her riding and training, perhaps opening a training and breeding barn of her own.

In the meantime, Lily and Moose will continue what has become a spectacular career.  Moose has multiple National Championships to his credit in the Working Hunter division and has qualified for the American Eventing Championships three years in a row, placing in the top five in the Novice Division each time out.  He continues to compete in Barrel Racing and Pole Bending, also finishing in the top three at every competition.  Also, at horse shows and events intended to introduce the general public to horses generally, Moose is always there, demonstrating the athletic ability of this great representative of the American Saddlebred and the special bond he has with his owner, trainer, rider, and best friend, Lily Callahan.

If you have a great "Saddlebred Story" to share please email j.cushing@asha.net for a chance to be featured in the Saddlebred Strong Series!