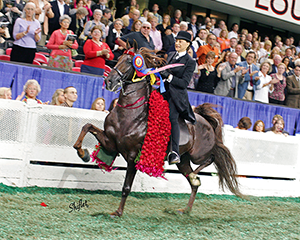 The 2007 Five-Gaited World Grand Champion CH(SA) CCV Casey's Final Countdown (114673S) (WGC, RWC) has passed at the age of 22. He will forever be known as the dynamite stallion with the wild mane that partnered with the great Michele Macfarlane to win the Five-Gaited World’s Grand Championship in 2007. His breeders and part owners Chris and Ruelda Viljoen of Si-Si Stables always felt he was destined for success on the big stage in the United States, he proved them right.

CH(SA) CCV Casey's Final Countdown came to the United States in 2004 when Macfarlane joined his ownership group. She exhibited him for five years and collected victories in the five-gaited and fine harness division from California to Kentucky.  Macfarlane had this to say of him, “He was a gentle, friendly stallion. Whenever he saw me walk by the fence he would come over to visit. In the show ring, he had a good attitude and a big heart.” Macfarlane buried her stallion on Scripps Miramar Ranch “in a pretty spot in a grove of trees. Every time I go there I’ll remember how much fun it was to ride him."

Along with his World’s Grand Championship victory, he will be remembered by many for being an ambassador of the American Saddlebred. He partook in major equine presentations across the country, such as the nationally televised 2015 Equestfest in Burbank, Calif. with Carson Kressley aboard and the opening ceremonies of the 2010 World Equestrian Games in Lexington, Ky. Moving forward we can look to the progeny he left behind like RWC Senor Frog (125437G) and Lakeview's Anticipation (125069G) to carry on his legacy in the show ring.