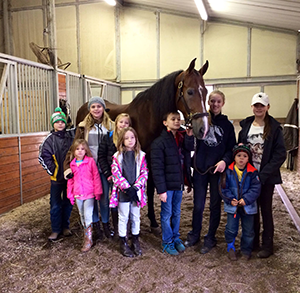 We are pleased to announce the September 2018 ASR Diplomat of the Breed is Good Night Sweet Dreams (117664). He is an American Saddlebred that is true to his name and has made it his life’s work to make friends, new and old, #ASBDreams come true!

Good Night Sweet Dreams, or “Sammie” as he is affectionately known, has been a part of the Vantage Point Farm family for 11 years. The 12-year-old gelding by CF First Night Out (91237) and out of With The Spirit BW FS (113466)was purchased by Vantage Point Farm owner and trainer May Chadick as a yearling at the UPHA Incentive Sale in 2007.  He made his show ring debut in the All American Cup 3 Year Old Park Pleasure class, where he placed in the money from a field of 25 entries, and finished the year with a nice tie in the UPHA Classic Finals. His four-year-old season was no different. He continued  his success through displaying his superior quality and manners and culminating by season’s end, being ridden by a 10-year-old.

Sammie remained in the Vantage Point Farm family after he was sold to Patricia Conde for her 10-year-old daughter, Alexa. The two teamed up and began winning Walk & Trot Pleasure classes across Texas and Louisiana. This duo continued to grow and improve together and before they knew it, they were enjoying much success in the Open English Pleasure division, taking numerous blue ribbons and state highpoint awards spanning the next few seasons. In 2017, Sammie made his debut in the Hunter Country Pleasure division. A stunningly beautiful horse, with a lovely long and correct stride, he exemplified everything the American Saddlebred Hunter horse should be. For two years with two different riders, Sammie continued his winning ways in the Hunter Country Pleasure division across the country.  Sammie didn’t just advance Alexa’s riding career during this time, he also carried several other riders to prominence in their introduction to the show ring, both in Academy and Performance classes. 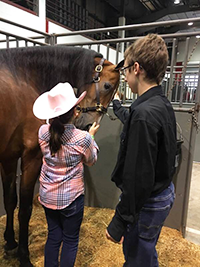 Along with his career as a show horse, Sammie finds time to be an ambassador of the breed in the Houston, Texas area. His versatility, kindness, and beauty have made him "the horse of choice" to represent the American Saddlebred in Houston. Sammie regularly serves the American Saddlebred and Houston community as a participant in the following events- Blue Bonnet Equine Humane Society Horse Expo, Pin Oak Charity Horse Show's Education Day, 2018 Pin Oak Charity Horse Show Publicity Campaign, Political and Charitable fundraising efforts, senior citizen living farm tours and demonstrations of breed introductions and equine anatomy education at Vantage Point Farm camps. As a result of these events, he often exposes groups of 150 to 250 individuals to the American Saddlebred breed at each setting. 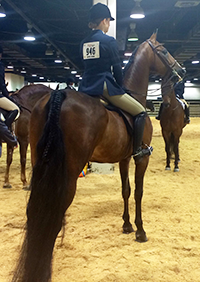 In true American Saddlebred fashion, Sammie does not stop there! Sammie participated in the 2018 Houston Livestock Show & Rodeo which is one of the largest public livestock and agriculture events in the United States. More than 2 million people were in attendance over the course of the event where the livestock and horse show drew 33, 949 entries from across Texas and the United States. Sammie was the only American Saddlebred on the grounds and he was exhibited by Sydney Young to a remarkable third place finish in the Hunter Under Saddle class at the event’s All Breed Youth Show. They competed against 17 entries and had a three judge panel, which were all Quarter Horse officials. The team came away with not only one first place vote, but Sammie was the highest placing non-quarter horse in the competition. In addition to his success in the show ring, he made an unequivocal impression on the other exhibitors, judges and spectators. This horse of a “different breed” gained countless fans at the rodeo with his personality, elegance and intelligence. He won more hearts with every spectator who made a visit to his stall door during the event. Truly an amazing contribution and true diplomat!

Good Night Sweet Dreams will continue to be a beloved and treasured part of the Vantage Point Farm family and continue to give back to the American Saddlebred and Houston community. 2019 will bring him back to the Houston Livestock Show & Rodeo and continue his ongoing role as a mount of choice for Vantage Point Farm riders, new and old, whether giving lessons or in the show ring.  Sammie is a shining example of the American Saddlebred and now adds the ASR Diplomat of the Breed Sponsored by Freedman’s to his already outstanding resume!